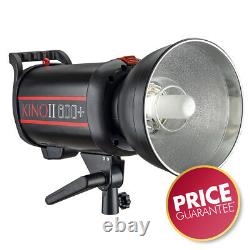 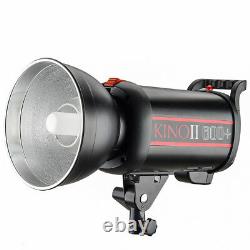 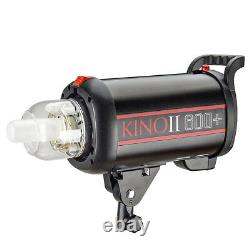 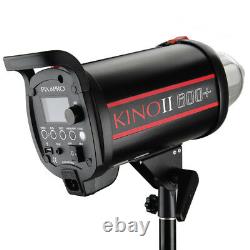 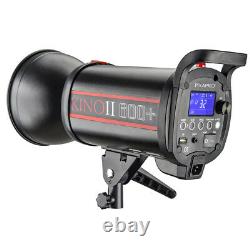 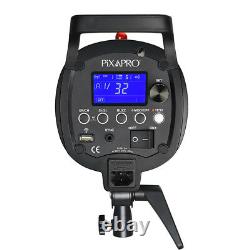 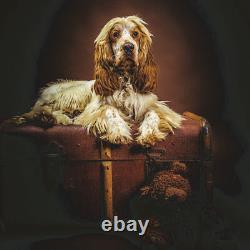 KINOII 600+ Studio Flash Head with Built-In 2.4GHz Receiver. The PIXAPRO® KINO II 600+ (Godox QS600 II) is a robust, versatile and dependable studio monolight strobe suitable for both the serious Amateur photographer and the Pro User alike. With its impressive 600Ws of power, it is the ideal studio strobe for use in large studios or for use with large modifiers such as large softboxes and large parabolic umbrellas etc. It also has an impressive flash duration of up to 1/2000th of a second, as well as super-fast recycling times of between 0.3 and 1.5 seconds. The KINO II 600+ features an 600Ws flash tube, that has a 6-stop power range (1/1 1/32 power).

The power output is represented by 5.0 min. On the digital screen located at the back of the unit.

The KINO II 600+ also features a 150W modelling lamp. The PIXAPRO® KINO II 600+ features a built-in 2.4GHz flash receiver, which allows it to be used in conjunction with the ST-III, ST-IV, or ECO 2.4 flash Triggers. This allows you to control your flash heads remotely, removing the need to go up and individually adjust every light in your set up, saving you precious time. It also has a 6.3mm sync jack allowing it to be triggered by a sync cable, or other radio triggering systems. The KINO II 600+ also has an intelligent slave cell that can be set to ignore a Pre-Flash allowing it to be used in conjunction with your TTL flashes with no issues which opens up a whole new world of lighting possibilities.

This item is in the category "Cameras & Photography\Lighting & Studio\Flash Lighting\Flash Heads". The seller is "essentialphoto" and is located in Oldbury, West Midlands.

This item can be shipped to all countries in Europe.